Levers make me think of simple machines: pulleys, wheel and axle, wedges, levers, and so forth. Some very complex problems can be solved with these very tools. Recently in one of my games, players had to remove the bar from a barred door, kinda like this: 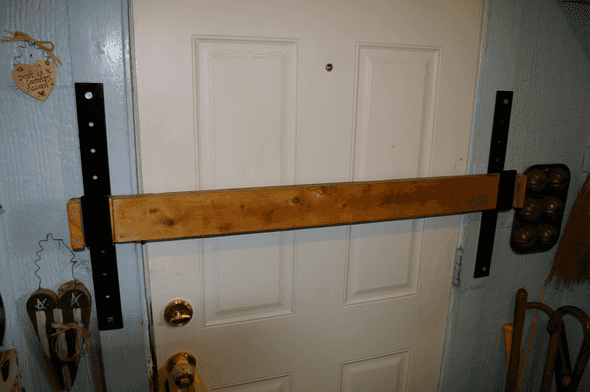 Now, there were some exceptions: the door had intricate carvings of snakes, the bar was made of stone (and quite large), and it was trapped. When the player characters picked it up, they heard a clicking noise and quickly put the bar down. After studying it a bit, they noticed that the metal hooks holding the bar were trapped. There are many ways to get past this, but they choose to crate a rough pulley by tying a rope to the bar and running it over the top of a casket which held a clay snake-man statue. They pulled and the bar came up and a hammer came out of the ceiling smashing the casket, but not the players.

That’s a roundabout story to basically say: allow and encourage your players to solve problems using something like a lever, something simple and something that you can reason about easily. Create problems that can be solved with those tools.