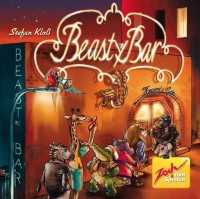 Beasty Bar came recommended from the folks over at Fortress Ameritrash as a nice little filler with some take-that action in it and I can say it delivers.

The basic premise if you have animals and you want to get them into a nightclub. Each animal will manipulate the line in their own way. Once there are five animals, the two in front get in and the one all the way at the end gets kicked out. You’ll end up playing all twelve of your cards, though the last few cards may not matter.

This game reminds me quite a bit of Guillotine in that it’s about manipulating a line of cards. However, you’re creating the line, and the cards used to create the line also manipulate it (instead of cards that only manipulate the line). I think it’s a bit better than Guillotine and would probably bring this out more often.

If I have any cons is that you probably shouldn’t play this game with people who are easily offended by someone taking an action that hurts your position. I also feel like there’s a good bit of luck here depending on the cards that you draw and your position, but you should be able to mitigate this luck.