There’s a lot to like about Warhammer 40,000: Conquest. It’s a customizable game done by Fantasy Flight so you know that it’ll be well supported, have fantastic art, and likely enjoy a long life. It’s a Games Workshop property so you know there’s lore behind everything and if you’re a fan of that universe it’s likely all here. It’s an Eric Ltang designed game and he’s been hitting it out of the park lately with well designed games coupled with a relatively simple ruleset. Yet, I have my reservations.

Conquest is essentially an area control game, or, better yet, a lane control game. At the beginning of the game there are five planets (these form the lanes) where you can place armies. If you have more command icons on your units than the other player, you win the command struggle and get cards and resources. Then you do battle at the first planet and all planets with warlords. Whoever wins the first planet claims it as a reward. The next round starts and a new planet is revealed. The first person to claim three planets that have common colors (each planet has one to three red, green, and blue icons) wins. Alternatively, if you can kill the other player’s warlord you win.

I love the simplicity of this game: play cards, win planets, kill the other guys. Yet, there’s a lot of strategy here and there are plenty of options to keep your inner strategist busy. The deckbuilding is a bit different from my favorite LCG Netrunner: you pick a warlord and they come with 8 cards, you can then pick one of two factions to pull other cards from, but you can’t pull in any loyal cards from the other factions. So you can borrow cards, but you don’t get the best cards that faction has to offer.

I have two problems and if either was “fixed” I could ignore the other. I’m not a huge fan of the theme. Sure, far-future science fiction is very cool, but the Warhammer 40,000 universe is a bit over the top for me. The other problem is the game is expandable and if it wasn’t I could see this being a game my wife would enjoy (I’m thinking along the lines of Blue Moon Legends). If the game was expandable with a different theme or if the game was self contained I could ignore the other problem. Still, this is a great game and if you’re interested in getting in near the ground floor of an LCG, this is a great one.

The game is beautiful, it has wonderful components, gorgeous art, and a wonderfully simple ruleset. You auction for the favor of the gods, take actions based on that, and attempt to build (or conquer) two metropolises in order to win the game.

Yet every single time I’ve played this game I end up disappointed because it just ends so suddenly with the losers being a little shocked that the winner won and that the game is over. I was hoping that Titans might fix that problem, removing some of the sea spaces and adding much needed army mobility for the players who didn’t win Ares. However, those changes didn’t change the end game: it’s still sudden and surprising.

This will be the last time I buy this game, I’m officially done with it. 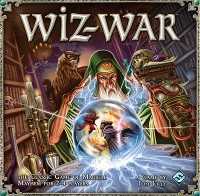 Here’s another game I sold at one point and reacquired, but this one—played the same night as Cyclades—went much differently. Instead of being frustrated with how quickly things ended or the loser’s acquiescence to just take the pity prize that is Apollo, we were having fun setting traps, teleporting, casting fireballs, and generally causing mayhem.

Wiz-War is a game that’s all about the group you’re playing with. If you have a staid and stodgy group then I’d avoid this one, but if you have a group that’s willing to goof off and screw with each other, this can be a blast.

If there’s anything I don’t like about the game it is the randomness of the card draw and all the damn tokens. You can deal with both by removing cards from the deck. Simple! This is an eminently house-rulable game and the game even comes with a handful of variant rules that are based on some of the game’s previous seven editions. Don’t let that scare you though, this isn’t a sandbox game where you have to make up your own rules. The base ruleset is solid and works well enough and once you start pushing against the confines you’ll find exactly the rules you want to change (“maintaining” cards is what we decided to ditch).

I’m hoping to keep this one around now and start to shuffle in the expansions soon. 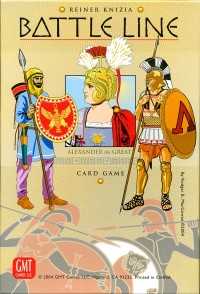 I seemed to have a knack for this one, but my wife figured it out with our most recent three plays, beating me 2 games to my 1. I still really enjoy it though, it does a great job recreating that feeling of a battle with feints, pushes, and a little bit of luck.

This game is likely to push out some other smaller two player games that we keep around and it might make the trip to Cape Cod later this year.

One weakness I’m seeing with the game is the luck of card draws, sometimes your cards have no synergy. However, I think a good player can overcome this, and I’m looking forward to figuring out how.

One piece of advice with this game: don’t take too many tactics cards. Since you can only play one more tactics card than your opponent, they can force you to keep those tactics cards in hand keeping the number of troop cards in your hand low.

I don’t like it when a publisher releases a game and claims a player count that’s actually terrible to play with. Beasty Bar with two is pretty abysmal.

The game itself is about manipulating the line of animals trying to get into the club, but with two players it just ends up being a race to remove the other player’s animals, which is pretty boring.

We ended in a tie and I suspect most two player games of Beasty Bar would end that way. Not recommended for two players.

This has to be my wife’s favorite game in recent memory. She really enjoyed Race for the Galaxy before this one, it was a game we could easily play in 15-20 minutes with a lot of strategic depth. Roll for the Galaxy is headed in that direction, with the added benefit of being much easier to teach.

For those who haven’t played either game, the goal is to have the most points at the end of the game. You do so by building developments, settling planets, and shipping goods. The game ends when you have 12 planets and/or developments in front of you. In Race you do so by playing cards and paying other cards to build them. In Roll you do that by rolling dice and using the correct side to advance your developments and planets.

One weakness that Roll for the Galaxy has is the size of the dice. I understand they had to be made small for the optic point and for the dice cup, but you can easily knock them over accidentally when organizing them behind your player shield.