This game was underwhelming and I’m happy about that. I purchased Star Wars: X-Wing near when it came out. I bought the extra ships and expanded it to the point where I needed a big Plano box in order to store all of the ships and even that didn’t fully contain it. I also bought the fancy acrylic templates. I later realized that I never played the game and it was just collecting dust, taking up space, and it represented an expense that I wasn’t happy with. I was much happier when I sold it.

When I saw Star Wars: Armada I knew it would be a similar story. I’d end up collecting more ships while never playing the game and I’d eventually get to the point of expansion fatigue and sell it.

With all of this baggage in tow, I tried a quick learning game thanks to my friend Tim. I think this game does have a lot going for it. I love the movement of the capital ships and how the bigger the ship, the more planning you have to do. Fantasy Flight most definitely achieved a very different feel from X-Wing and they should be commended for it.

However, there’s a lot I don’t like. Let’s start with the squadrons. These squadrons are your X-Wings and TIE Fighters and have different movement and shooting rules from your ships. They move in straight lines through the capital ships and they can only shoot at a very short range (which admittedly makes sense). The problem is there are so many of them and they’re in the way of your capital ships. Additionally, they have these little dials to mark their health and these sliding tabs that mark whether they’ve been activated. Both are great ideas, but the execution means you’re frequently going to accidentally move or knock over squadrons.

I think there’s a lot to like here for the serious player, the person who can invest a lot of time (and money). However, for a casual player, especially one who doesn’t have a lot of tolerance for the fiddliness of miniature games, I’d say this is a pass. 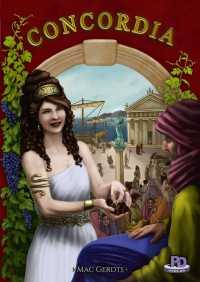 I’m glad I got to try Condordia with three players as it was shorter than my previous five player game. However, it still felt a little too long (I think we clocked in around an hour and 45 minutes). I’d like to get this game to somewhere near 25 minutes per player. However, the game is still good enough that I want to try and get it to that point.

This time around I tried a different strategy versus my five player game. My opening involved rushing to get some basic building blocks: bricks and food. Once I had those I started to expand out to get more of those along with some money. I managed to snag a card that gave me points for each wheat city, so I had a goal in mind that also synergized with Saturnus (which gives you 1 point per province where you have a house) since the wheat cities where somewhat spread out.

Later in the game, once I had all of the wheat cities, I started focusing on producing a good of each type while placing those houses in completely different provinces to give me points for both Mercurius and Saturnus.

Overall I felt like my strategy didn’t focus on any one thing, it just did a lot of things really well. It felt slow to build things at times due to my spread out brick houses, but it did win me the game.

The more I play this game, the more I enjoy it and while it still feels long, I can get over that.

Glory to Rome is one of my wife and I’s favorite games. It’s something that we both know well enough that we can play it in about 20 minutes and typically play it multiple times due to the randomness of the cards.

If you haven’t played Glory to Rome before, it’s a card game where the cards function as buildings, as clientele, and resources (used for building buildings or scoring points in your vault). In addition, each card has a role (same as the clientele) and that’s how the round’s leader decides what the rest of the group will be doing for this round whether it’s building buildings (Craftsman/Architect), acquiring more clientele (Patron), putting resources into your stockpile (Laborer), moving resources from your stockpile to your vault (Merchant), or demanding resources from the other players (Legionary). The game ends either when all building sites have been used up (there are two per player) or when someone has built a building that otherwise ends the game.

Like I said before, this is a perennial favorite around my house. I love the different card combinations and figuring out what approach will work best. Do you spread yourself thin very early and start as many buildings as you can or do you focus on one building at the expense of all others. Then there are the various ways to win: building buildings earns you points, moving resources to your vault earns you points, having the most of a type of card in your vault earns you points, and then there are buildings that will just win you the game with certain conditions.

There are some negatives though. For one, it’s tough to teach. Easier than Race for the Galaxy, but new players should expect to lose their first few games while they grok how to play by the rules and then how to apply strategy later. Second, it’s a big deck and it’s shuffled, so there’s randomness as to what comes out. Some games you might have a wonderful (and obvious) strategy come out in your first few draws and some games might have you stuck with cards that are on the weaker side.

Overall, this is a fantastic game and if they ever decide to reprint it, you should pick it up.