This was probably my strangest play of Five Tribes yet, Shannon and I ended up tying 217 to 217 and there are no tiebreakers in Five Tribes so we shared our communal victory.

I find it fascinating that two people can take very different strategies in a game like this and that they’re both viable. Shannon went the route of getting djinn and I went heavy with the goods and somehow we ended up with the exact same score. If either of us had managed the same results with one less coin paid for turn order, we would have won.

I’m happy that this is in my 10x10 challenge and I’m looking forward to even more plays. 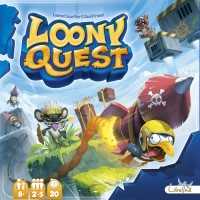 This one was something of an impulse buy when I realized it was hard to get ahold of and was pretty cheap on Amazon.co.uk. The basic premise of the game is you have a level that you need to get through and to do it you’re going to use a dry erase marker to draw on a transparency and then place that overtop the level. For every correct thing you do (collecting coins, hitting characters in those levels, drawing lines to the correct place), you earn points, but for every incorrect thing you do (hitting blocks, not dodging certain characters), you lose points.

I had fun with it, but I’m not wild about it. It felt like more of an activity with a score and it wasn’t nearly as funny as I had hoped. Then again, we didn’t use the timer, nor did we ever earn any penalties. I do want to try it again, and this time we’ll probably play arcade mode which forces a penalty on everyone and we might use the timer, even on levels that don’t call for it.

I really wish this was on my 10x10 challenge since I enjoy it so much and since it’s seeing so much time on the table. In this particular game, I managed to build up a great synergy with rare element planets and the six point development that gives you 2 points for each of those planets. That combination ended up winning the game by about 20 points, so it worked out well.

The more I play this game, the less I play Race for the Galaxy which does bum me out a bit. Race is an excellent game and far more portable than Roll, however the addition of explanations for the symbology and the way exploration is done by drawing a tile and picking a side make it a better game. 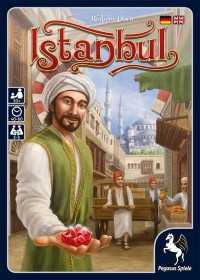 It’s not often that my wife asks me to pick up a game and it’s even rarer when she teaches it, so I was pretty delighted when both happened with Istanbul. Better yet, I really enjoyed the game!

A quick summary: you have a stack of discs with the top one representing your merchant and the small ones underneath being your assistants. You move around a 4x4 board and you can move 1 to 2 spaces from where you are now. When you move somewhere you take the action of that tile and leave an assistant there. Alternatively, if an assistant is already there you can pick them up and take the action. If you’re out of assistants, you must either go to the fountain or go back to where you’ve placed a previous assistant. The whole while you’re gaining money, goods, and “upgrades” which help you directly and indirectly gain rubies which ultimately decide who wins.

First off, this game does a great job of combatting analysis paralysis. You must move, and you can only go so far. Additionally, if you’ve taken too many actions you must either take an action that’s close enough that has an assistant on it, or you must go to the fountain. In spite of that, your moves and decisions are not pre-determined nor telegraphed, so there’s plenty of strategy to apply here.

I’m happy I own this one now and I’m even happier that it’s a game my wife wanted and taught. 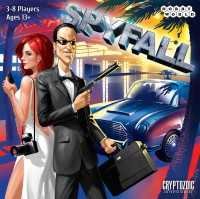 I’ve only played this once before and it was mostly a practice run with three of my co-workers and every play has been through a web implementation. These plays were with my co-workers as well, but they were in person and with seven players (though two people were sharing a phone in order to play, hence why I have it listed as six players).

I love deduction games and I love games that require lying, and this does both. In addition it’s short enough to play a few times and doesn’t overstay it’s welcome. What Spyfall does differently is it’s roles. Instead of just being at the corporate party, you’re the boss, the entertainment, or maybe the unwelcome guest. Those different roles will throw off the other players just enough to keep everyone guessing.

I’m looking forward to this one showing up so I can play the physical version, but the online implementation is fantastic for traveling and the meanwhile.