Recently Google announced that they’re shutting down Google+ in 10 months. Before I really got into RPGs, Google+ was merely the butt of a few jokes, but largely ignored. However, the RPG community at large heavily used Google+ to share new blog posts, talk about ideas, and market new products.

Right now there’s a bit of a vaccum as folks scatter and attempt to find it’s replacement. It looks like MeWe will likely be the winner, though there’s a contingent of OSR bloggers that’d love to see things go back to blogs and comments. I’m not wild about comments, but I love the idea of getting back to longer, more thought out content, rather than small bits and bites.

One of those bloggers—Zak Smith—created a questionnaire to keep OSR bloggers talking with one another. I’m not much of a blogger, but these are my answers.

One article or blog entry that exemplifies the best of the Old School Renaissance for me:

The Magical Three by B/X Blackrazor. I don’t think there’s anything wholly unique there, though maybe there is, but it’s the idea that if the rules don’t work for you, just change them. You can always tweak everything to get it how you want and then reap the rewards (or suffer the punishment). Then share the results with the community.

My favorite piece of OSR wisdom/advice/snark:

Don’t look at your character sheet, the solution isn’t there.

My experience is pretty limited, but I loved running Sailors on the Starless Sea. It was incredibly freeing after mostly running 5th Edition D&D games. It was more gonzo, had more paths, put the players in more terrifying situations, and made the players think a lot more.

My favorite house rule (by someone else):

I already mentioned The Magical Three, beyond that I really enjoy Jeff Rient’s carousing rules (though I’m nervous to use them with my 5e group) and Trollsmyth’s Shields Shall be Splintered rule as it’s quintessentially OSR.

How I found out about the OSR:

I enjoy almost any character generator:

Best place to talk to other OSR gamers:

Google+ was a great location because everyone into OSR had tacitly agreed to be there. With that gone, people are mostly going their separate ways, but MeWe seems to be gaining the most traction.

Personally, I’m alright with MeWe, but part of me was looking for a reason to stop checking yet another social network and this may be the spark I needed. I’m following more blogs now and I’m back on Twitter after a short hiatus.

I think if you actually want to talk you’re probably better off at Discord, but that’s a total fire hose.

Other places I might be found hanging out talking games:

I’m not sure I have one. Rolling in front of the screen is as close as it comes, but I think most folks in the OSR appreciate that.

Coriolis. I’ve been running a game for some co-workers on and off over the past year or so. It uses a dice pool mechanic, so the change is always good to shake things up, and I love the combination of Firefly with Tales of the Arabian Nights. I also really appreciate how much the rules leave up to the game master—there’s a lot of loose ends in the fiction.

I don’t get to play much, but I love the DIY attitude and the sheer creativity of it all. And it’s not as if other RPGs aren’t creative, but the creativity in the OSR is more focused on the adventures and encounters than on rules or new spells.

Two other cool OSR things you should know about that I haven’t named yet:

There’s something about Anomalous Subsurface Environment that makes me really want to run it. I love how gonzo it is.

There are various takes on brainstorming in the OSR, but Jeff Rient’s take on three steps to memorable villains is great. Take that boring Gnoll, and turn it into a Winged Gnoll into a Myconid Winged Gnoll, with every flap of it’s wings poisonous spores are sent downward.

If I could read but one other RPG blog but my own it would be:

Please don’t make me read my own writing. There are so many good blogs out there and picking one is tough, I think I’d have to pick Knights in the North because my current preferences lean toward Dungeon Crawl Classics.

A game thing I made that I like quite a lot is:

My current campaign for Coriolis, though it’s not a thing I’ve published. Maybe I should after the group gets through more of it.

I don’t care whether you use ascending or descending AC because:

It’s your game (but I’d pick ascending AC because it fits my players’ sensibilities).

The OSRest picture I could post on short notice: 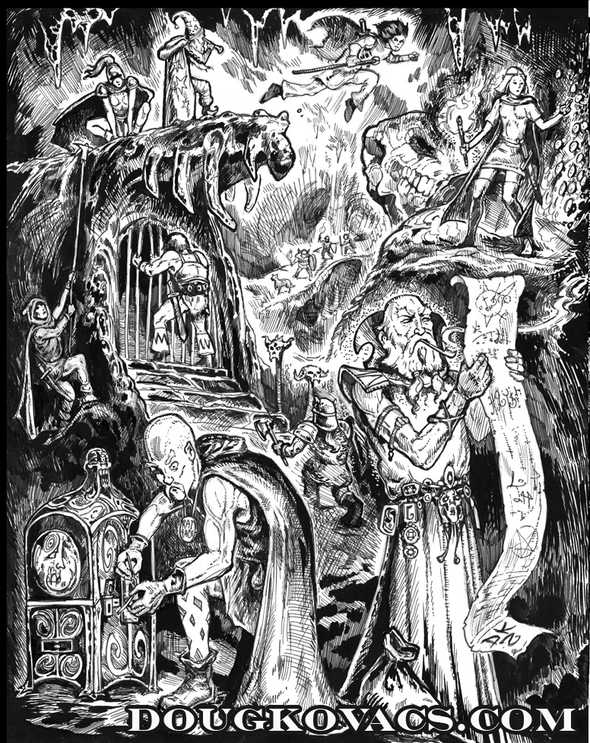