Spoiler warning: I’m going to talk about Tower of the Black Pearl, an adventure for Dungeon Crawl Classics. If you’re part of my group, play DCC with me, and haven’t gone into a tower that has risen from the seas, then you should turn away now.

I love running Dungeon Crawl Classics. It’s an absolute joy to run. As a judge, there is a lot of flexibility in the system and you can mix and mash rules from other OSR games or other Goodman Games properties (like DCC Lankhmar’s fleeting luck rule). There’s also a ton of additional content from fans and publishers like–the Gongfarmer’s Almanac has 3,220 pages spread across it’s volumes from the past 6 years, all for free!

However, it’s the adventures that tend to pull people into Dungeon Crawl Classics in the first place. I’m reminded of a number of towers from the various adventures, but one that I fondly remember is the Tower of the Black Pearl. In my particular game of this, the players had just set sail from a sinking ziggurat created by the death of a chaos lord and the sinking caused an enormous wave to send the players west. 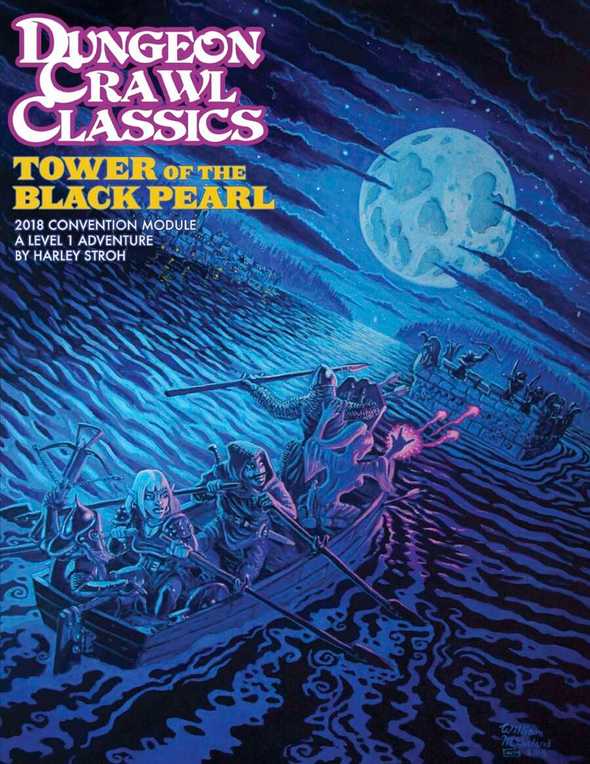 Once they found a suitable town to dock in and find an inn to stay at, a merchant approaches them and tells them of a tower that rises once every decade from the sea. Within that tower is a black pearl he wants and he’s willing to pay 25GP per player (keep in mind that treasure amounts in DCC are far lower than in B/X). It turns out the the tower was built by a wizard of incredible power and the black pearl is pretty much going to bring doom to anyone who possesses it, but you can’t blame a guy for trying.

All of that is fun and flavorful, but the best part is that the tower will submerge in 8 hours or–more likely–whenever you say it will. This creates a fantastic escape sequence as players swim up the tower trying not to get caught while grabbing as much loot as they can. I love the tension created by a lack of time and the agony over risking it or just getting out. It creates immediacy and verisimilitude, and those things make an adventure fun.