Arcadia Quest is on my 10x10 because it’s one of those punchy, fun games that lets you just bash your friends on your way to victory, collect loot along the way, and be awarded superlatives and titles for your hard work. We just started a campaign and two games in I have no victories, but a lot of goodies because of all of the money I acquired. Even still, the loot won’t unbalance the game for long as each game leads to better and better stuff.

Recommended for the right crowd. 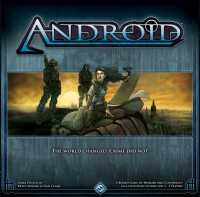 I played Android once before and thought it did some interesting things. Namely, it provides a lot of story in an interesting and tight framework. That being said, there’s an overwhelming number of rules at first blush. After you play for a few rounds, it’s not too bad though and it starts to flow. Still, it’s a long game and a lot of turns you’re left staring at the board wondering what to do. I found myself asking my friends if I could undo my turn because I noticed a problem here or there with what I did. That definitely drew the game out a bit, but it would go away with time.

Android isn’t a bad game by any means. It has an interesting theme and setting, and some mechanics I haven’t seen in many places. Yet, I’m not dying to play it again (even if I think there’s a good amount of replayability). I guess, I feel that the game isn’t worth the amount of time it takes to play.

Recommended to play at least once, but I wouldn’t recommend buying it.