Continuing our ongoing campaign, I took my loot from the last game and soundly won this particular game. I managed to win by scooting around the board quite a bit and using a take another turn potion to finish the match. I also had a lot of money after this particular game, so it’ll be interesting to see how things play out in the 4th game of the series.

Highly recommended, especially if you can swing campaign play. 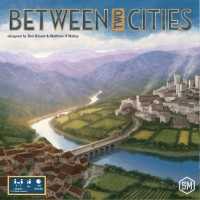 I like Between Two Cities quite a bit, it’s easily taught and plays fast and is a great closer for a night. However, I’m still having a hard time figuring out exactly how to win. That’s not a bad thing, but my concern is how much control do I have over the situation? Arguably a lot, but when you’re working with two other players, you’re admittedly at the mercy of others. Still, I happily play this one, but I have some minor doubts.