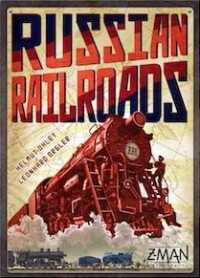 I’ve played Russian Railroads before, but I hadn’t played the German Railroads expansion before, so I suggested playing a game online this week with my co-workers. I like the few changes made to the base game, but I realized that the game doesn’t do enough for me to bother keeping it. It’s a straight efficiency puzzle and I’m realizing over time that those kinds of games are interesting at first blush, but become old quickly for me.

Not recommended unless you’re a fan of low-conflict efficiency puzzles.

Now, comparing Russian Railroads to Keyflower, you’d think that I would just dismiss Keyflower as well, but I’m glad we got to play because there’s a lot more interaction going on here. Yes, the game is about efficiency, but between the bidding and using other people’s tiles you’re interacting with everyone quite a bit. I also feel like there are lots of different strategies that you can try out.

This was the first game I’ve played with aggressions and wars and it was a far lower scoring game than any of the previous games we’ve played. I was aggressive very early and had forgotten how the aggressions worked and lost most of them, but eventually turned the tide. I found it interesting that there were clear inflection points where my civilization went from the military power, to pacifist, and back to military power again. This game (which was online) also showed me a few rules I had been getting wrong and indicated to me that I need to go back to the rulebook to learn how aggressions and wars work.

It’s hard to judge this one since I’ve only played two “short” games without milestones, but I think I’ll enjoy this one once I manage to play a longer game. The building of your business and your employees is really interesting, and how you build out your org chart to represent what you can do in a turn is unique (at least to me it is). I have concerns about how new players will likely lose when playing for the first time, but I do think there’s an audience for a cutthroat economic game like this one.

Not sure yet. Come back later.