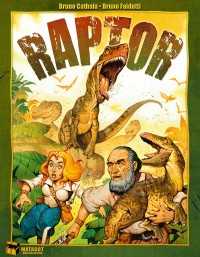 The more I play Raptor the more I appreciate how clever it is. Your choices are limited, but difficult and picking the right card is never as easy as looking only at your hand of three cards. Once you have a few plays under your belt, you’ll start to look at what your opponent has played and know what they need, with that in mind, you can play cards that directly counter those needs: know your scientist opponent needs more scientists on the board and he’s played his 6? Play your 2 so it’s a wasted card. I feel like this one has more depth the more I play it and I really appreciate owning it.

My wife and I continue to really appreciate 7 Wonders: Duel as a great game for relatively new parent-gamers. If you want to play something, anything and you only have 30 minutes, you can easily knock out a game of 7 Wonders: Duel in that time with setup and cleanup. The tug-of-war between the different win conditions keeps you on your toes. While you can see what your opponent is trying for and the direction they are pursuing so you can put the kibosh on their potential science victory.

Our two player games of Viticulture have been fun. I’ve enjoyed building up my winery, using the different visitors to further my goals, and then beginning to ship orders. In this particular game, we introduced the Mamas & the Papas, an expansion from Tuscany. They add a wrinkle to the setup so you start with something different from the other players, which I very much enjoyed.

However, this is the second two player game in a row we’ve played that’s ended kinda flat. When one player has won the game, there’s usually very little the other player can do to catch up. Now, it’s unfair to toss the game out for this since that’s only happened in two games, but it’s something I’m a bit more aware of now. I’m still interested in playing it, but two players might not be the best way to play, we’ll have to try again to see.

I’ve only played this online before, but after seeing so much positive press about it, I wanted to play the physical version. Well, it was out of print and pricy, so I waited for the inevitable Big Box edition and here it is.

I have a lot of positives about El Grande:

And really, I don’t have any negatives, it is a great game. However, I’m wondering if there’s room in my collection for both this and Mission: Red Planet. Both are excellent, play quickly, look great, and have plenty of variation. I like Mission: Red Planet’s role cards, but I also like El Grande’s power cards and how they’re permanent. There’s really no buts here, so I’m not sure what to do for the moment.

This was the first time I’ve played Risk: Star Wars Edition as a four player game, and man it was a blast. I was one of the Empire players and we had an excellent start, with the Death Star just destroying entire sectors with almost every roll. The Rebels, however, were making progress on Endor to destroy the shield generator. The Millenium Falcon went down relatively early, but we never lost the Executor and just kept depositing TIE fighter son the board. In the end though, the Rebels managed to bring down the shields and promptly destroyed the Death Star! It was quick, fun, and full of tense die rolls.

I think the team game is the way to play this game, it was an absolute riot and trash talking just came naturally.