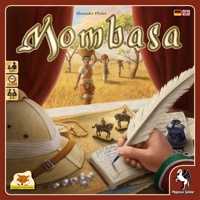 I’m not sure what I was expecting with this game. It languished on the shelf for a while, largely forgotten about due to its bland cover and four player maximum (my game group nights have been growing). It was about to go up for auction when I walked my wife to try it out with me.

I had read the rules a month or so back and generally understood the game, but upon opening the box, I did not feel confident explaining it. I did my best, but still committed the ultimate sin a board game explainer can commit: reading directly from the rule book while teaching. My wife took this very well and in two rounds we both understood the game well enough, with some rule mistakes here and there.

It’s not like pat games I’ve played before. It has some elements of those games and some that I haven’t seen and it combines those in interesting ways for a game that’s innovative while feeling similar. The card play is pretty unique to me, where you have slots you play cards to, and those correspond to separate discard piles. Before you discard at the end of your turn, you can pick up one of the discard piles and now you have those cards. Picking the correct column to play to is an interesting decision.

The other wrinkle is the stock system that rewards both diversification and specialization. I’ve played both ways and can say that both strategies seem valid.

About my only concern now is longevity. I can look at this game and say that it has a shelf life and it’s in the 10-20 play region. However, I so rarely play games that much, so this is barely even a downside.

If you have any interest in euro games and stocks didn’t already chase you off, give this one a shot. 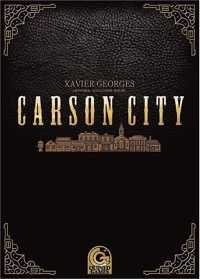 It’s been a long time since I’ve played Carson City. It’s a game I had and sold a while back and alway regretted. When the Kickstarter went up I was all over it. So, do my memories match the reality?

Yes, generally. I remember the game being surprisingly short, but not negatively so. It’s best for groups that don’t get too butt hurt since you’ll be fighting over all sorts of stuff. It fares best with people that don’t mind rolling dice for some resolutions (though this is typically a mitigated die roll). In our game, there was a huge land grab and everyone crowded Carson City and the southern mountain range. I fared pretty well with my centrally located General Store, but some bandits held up one of my fine emporiums and prevented me from pulling out the win. Our game ended with a single point between first and second and then another post between second and third. Exciting!